First–let me say this was not on my list of “things to write” at the start of the week AT ALL. This is a surprise ending for both T and I.

Today, Barack Obama’s birthday, we started preparing FOR OUR MOVE BACK TO WASHINGTON, DC! We are doing it for you, Barack. HAPPY BIRTHDAY.

Okay that’s a lie—we are doing it because T got a job in DC.

He also had an offer for an internal promotion at (undisclosed employer). After an intense 72 hours, we came down on the side of the new job in DC. If you know me, you will think it sounds ludicrous there was any question, however, we really did struggle with weighing all the factors. OJ suggested we ask Alexa for a decision–if only it could be so easy! It’s such a big decision I felt knots in my stomach and couldn’t even sleep the night we made our decision.

Seriously–I had some big ideas about life here this year. Since we moved here it’s been like college in the sense that each year has had a different feel and focus—and I was really excited about what I had lined up for this year! Just this week I got accepted as a new contributor to ACMB. After last weekend’s bachelorette at Disneyland, I was really looking forward to our regular family trips to LA—driven by T’s PhD program at USC but envisioning Disneyland as our new home from home. Great optimism and hope. Always hope.

But to be honest, I also heard myself thinking, “I would LOVE a Suburban!” and worrying about losing myself by giving in to Texas and all its ways. And now, all those plans are out the window.

Instead we are moving forward in a big unknown way! We have “given notice” regarding our obligations here but the biggest mountain is scrambling to downsize our household and make our house presentable for show and sale. This was SO. NOT. IN THE PLAN. I so DO NOT DO chaos. Hahahaha—joke is on you, M! If only it was as easy as wearing this t-shirt.

If we ever get our house ready for public consumption, I’ll be impressed.

Selling it is a whole other thing, over which I have mostly no control, so “give it to God” as they say around here.

As the summer winds down and I see posts like this from Des on IG, I start dreaming about fall Saturday mornings when we all wake up, have breakfast, and turn on CollegeGameDay at 8:00am (Central time, y’all) just in time for the start, “WE’RE COMING TO YOUR CITY!!!” This year’s premiere was announced today, BARACK OBAMA’S BIRTHDAY, for September 1 in South Bend for Notre Dame-Michigan.

No matter how this all shakes out, I hope we can all be together as a family for as many College GameDay episodes as possible this fall.

I sincerely doubt we will be able to get to Dallas for the LSU season opener against Miami (“THE U”, whatever) on September 2, but Dallas/Ft. Worth IIIS on the #texas #bucketlist so maybe it will have to happen (also remaining on the list include Hamilton Pool Preserve, Houston, Schlitterbahn, and West Texas–that last one is definitely not going to happen).

I hope we are in DC by Halloween, even though Celina’s party is pretty fresh (delay move in order to vote for her in TX HD 121!). I’m always reminded on Halloween that walking is SCARY in Texas.

And the light at the end of the big unknown tunnel is being back in DC. My mom said don’t move for her—I said, don’t worry I am moving for Holy Trinity (and just in time for the church’s 225th birthday).

But the bottom line is that T’s new job makes it all possible. I hope this new opportunity is challenging and fulfilling for each and every one of us. Now the real work begins.

August 5, 2018 by ladytotteringhall
Life at the Hall

It has been bliss to be home at my mom’s house since Fourth of July, the events of which I’m calling #SummerAtSugars because my grandmother (who lives with my mom) is called Honey, so now my mom is Sugar (and we have Honey and Sugar). As we prepare to return to Texas tomorrow, I must share my musings over the past few weeks.

2. Everything keeps coming up Texas

I know–this is sooo amusing. 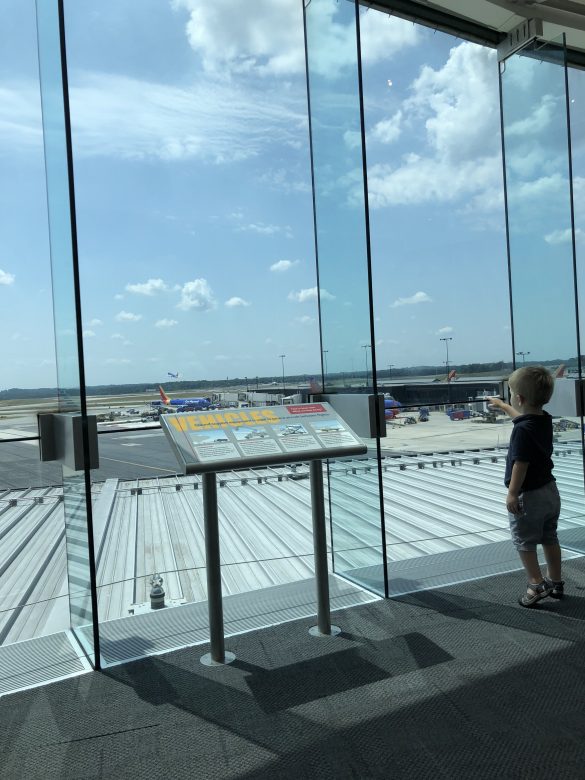 …to then do the whole thing in reverse (but getting an Amtrak train home in the afternoon). There were so many questions and moving parts and things to see this day, and this conductor was more than happy to answer OJ’s questions about the Amtrak train (where is it going? where did it come from? why can’t we sit next to each other? and so on and so forth, just. so. many. questions). 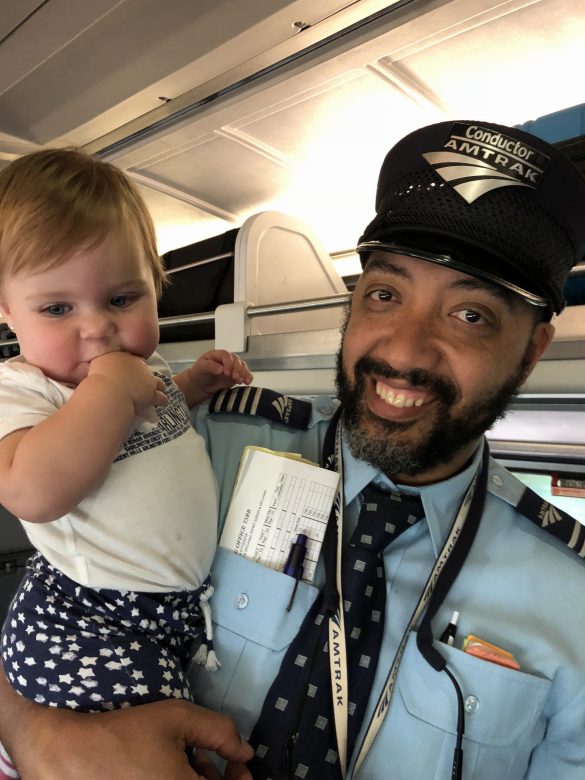 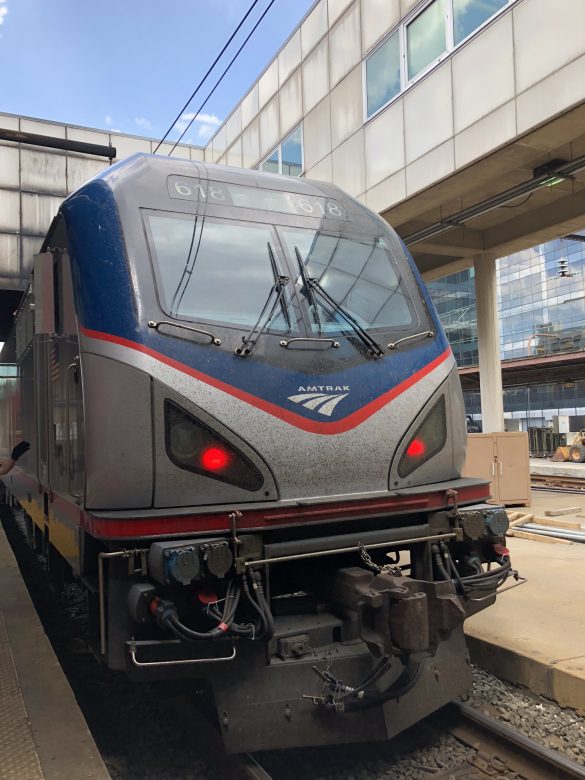 4. Are they growing too fast or not fast enough?!

Little Miss has the stairs down flat. OJ learned how to play solitaire.

I discovered my new go-to jam at Starbucks–it’s an iced cold foam capp and features the new strawless “sippy cup” lid. Love it. 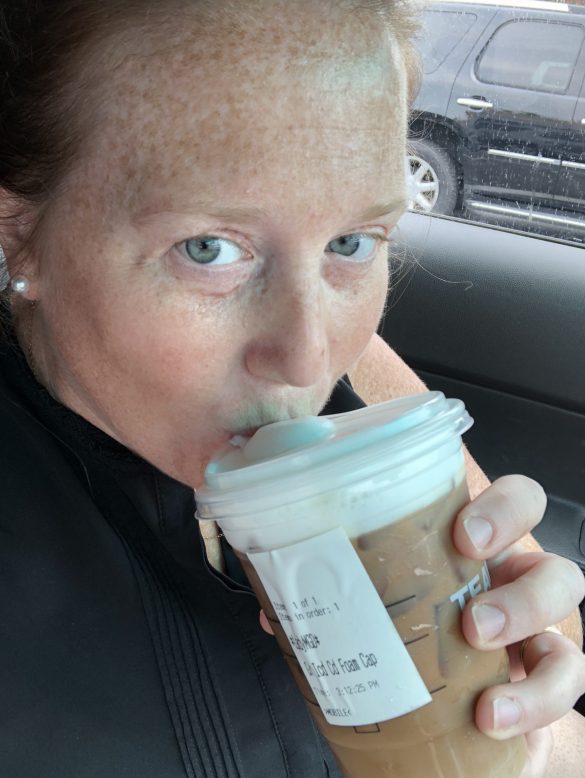 Little Miss is now one. 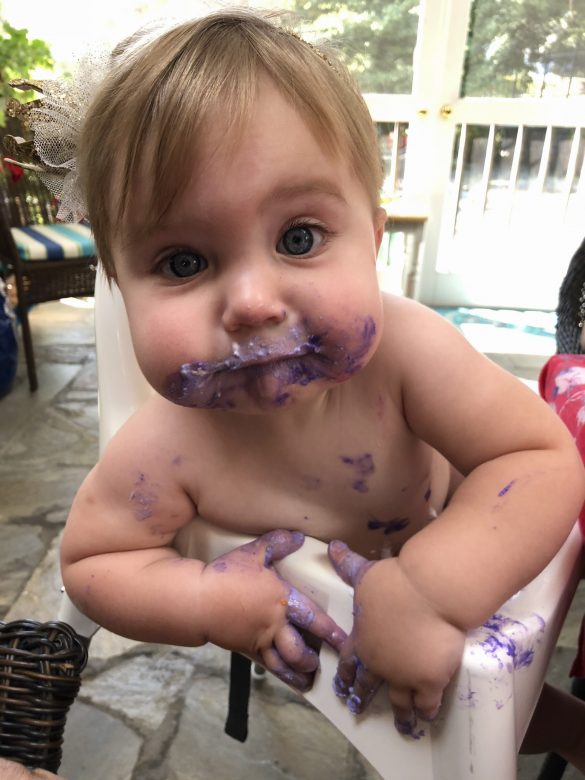 OJ had his first pedicure. The women swooned over him. I cringed that they do not have a kids rate. 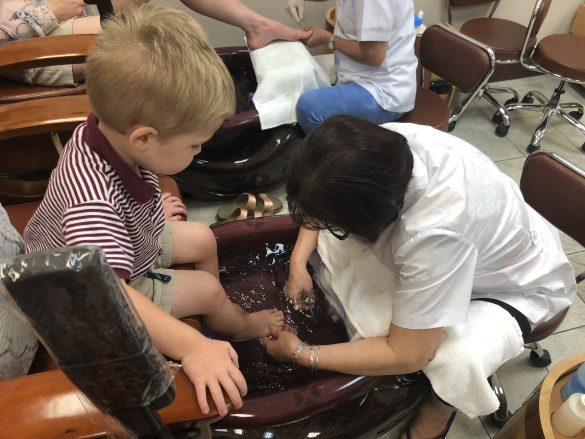 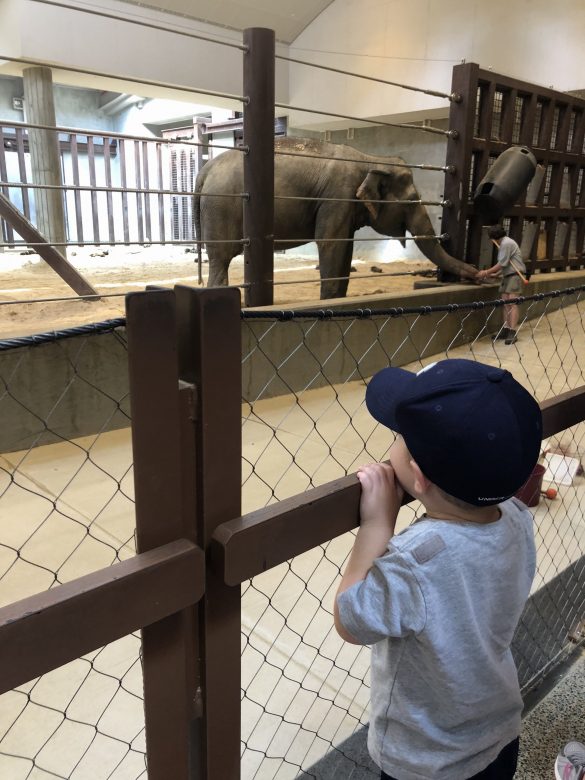 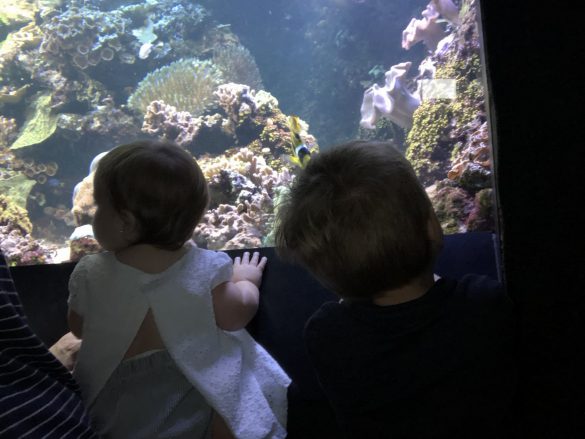 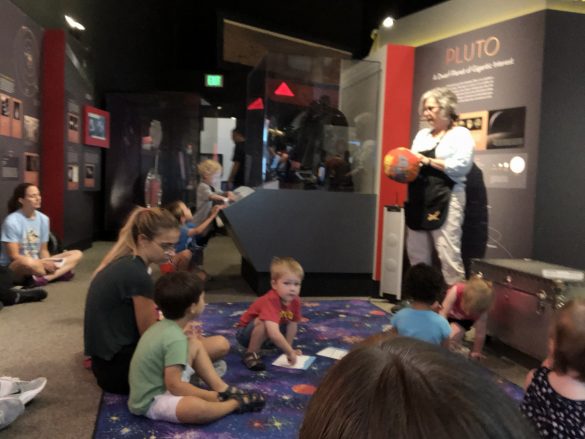 But my most favorite part about #SummerAtSugars… are all the small, daily moments of living together that FaceTime cannot overcome. The other morning, I got Honey all of her things (coffee, newspaper, yogurt, pills, turned her reading light on) and she says, “you did good but forgot one thing–my 2 cookies.” Lord.

My husband tells me he can’t wait until we get home, which I think is bollocks because I would love to have the house to myself, and ALL THAT SLEEP. OJ is big into the countdown until we go home too–the “sleeps until” count is always too many because he tells me, “that’s such a looong time!” and that he misses his fish.

Today, the last day of our trip, while Little Miss was crying about nothing, OJ said to her, “It’s okay. WE ARE GOING HOME TOMORROW!” Here, watching the rain from Aunt M’s window. 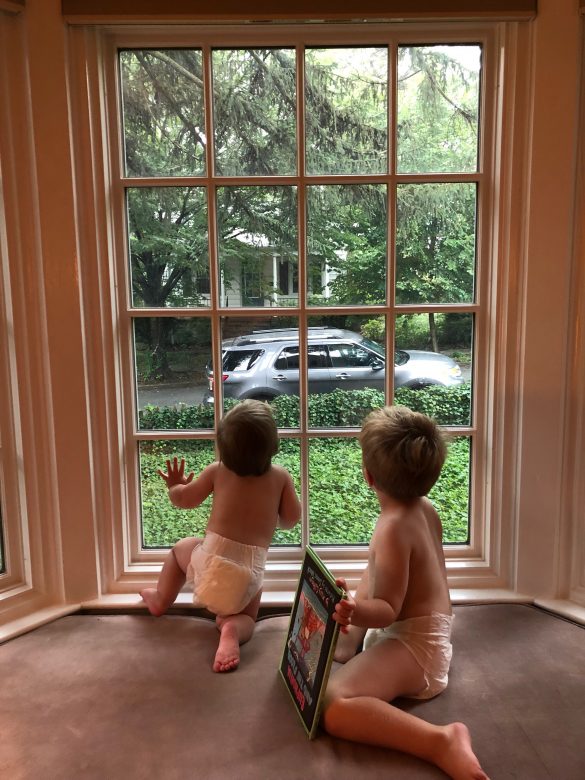 Selfishly I want to stay here longer but we must go for all kinds of reasons but ironically I really need to get home so I can go to my college roommate’s Peter Pan-themed bachelorette party at Disneyland next weekend, so I must leave my Neverland. Please pass the pixie dust.

July 24, 2018 by ladytotteringhall
Life at the Hall

Like it or not, summer is HERE–OJ’s last day of preschool is THURSDAY and perhaps the only thing we have done to prepare is two sessions of swim lessons at Good Swim.

Each session is two weeks long and class is held every weekday for 30 minutes. Wednesday is “Superpowers” day when the kids get to wear swim fins and Friday is “Fun Friday” when the adults get to swim too and maybe have an adult beverage.

In the beginning, it was not pretty. There was a lot of crying and anxiety but by the second session he was a different kid in the pool–cool, calm, collected and ready to go. However the one constant is that every night without fail he was an exhausted hot mess.

Back in our first week after three days of wailing, we made a deal that I would only take videos if he did not cry; if he started to cry then no videos. This turned out to be a very powerful motivator for him and a helluva lot of space on my phone.

However, he now enjoys swimming so much that he wants to swim at every chance, he pretends to practice in the bathtub, and he has started doing his “jump and swim” on our bed (as if he is jumping in from the edge of the pool and swimming underwater).

Since we finished our last day of class this past Friday, OJ has asked at least three times, “why we not go to Ms. Diana’s pool anymore?” I think he is HOOKED. 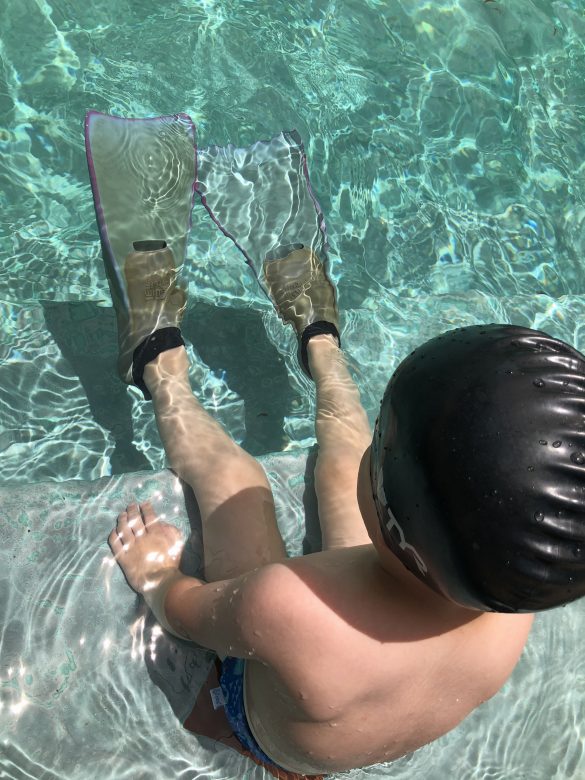