When my dad died in December, people said, it must be so hard during the holidays. The truth is that I have a hard time at the holidays anyway. No, it’s THIS time of year, college basketball season and it’s culmination, March Madness, that is the hardest without my dad. My dad loved college basketball. It was his way of operating. 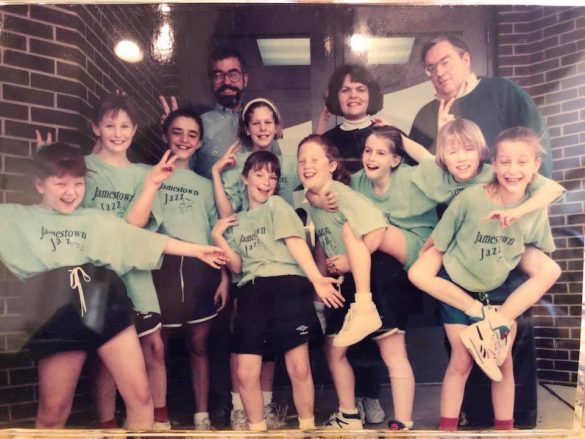 As a result, so many of my “Dad memories” are basketball stories. These are the ones I’ve been thinking about the most recently.

In the pre-internet dark ages, we had some kind of pool administration software on our home computer that my dad definitely did not know how to use. It was my first data input job–he would read and I would enter. In those days, he got home late from work so by the time we sat down to get started it was already past my bedtime. I was like 10 or 12 years old and even though I would have to get up and go to school the next morning, JEG didn’t care because, “WE HAFTA GET THE PICKS IN!” furiously scratching his head and gritting his teeth. Luckily, with practice, we became efficient (e.g. “Duke five times”) and I could do my part half-asleep. Then he would make me wait up at night for final scores so he could bring in the most up-to-date rankings to post at Carolyn’s desk (his secretary) the next day at work.

In 2015, my dad recruited a new commissioner-in-training (but what he really needed was me, his retirement secretary, back to help him). We were never under the same roof to do our pool administration, but we didn’t have to be, because of FaceTime (which he struggled to operate).

We didn’t know last year would be my dad’s final pool. He won. He won his own pool the last year he played. What poetry.

Maybe inappropriate at someone else’s funeral, but for my dad it was totally befitting to discuss the transition plan of his pool at the wake. Paw Power, who worked with my dad back in the pre-internet ages when he was a young lawyer, has taken over the pool and brought it into the 21st century which makes a helluva lot of sense.

About the time I was in middle school, I got to know Colgate basketball. We started going to more games.  We showed up early for the pre-game reception and stuck around afterwards for the post-game reception (these were the Jack Bruen days, after all). Prior to American joining the Patriot League, Navy was the closest game to home, so we often went to the Colgate-Navy game, and during those years, Navy was our big rival. I also remember traveling with my dad on the weekends to other Patriot League schools like Lehigh and Lafayette. But whenever we went to Alumni Hall at Navy, my dad would say how Colgate needs such a nice arena. Like a moth to a flame, you could just count the moments until he would say, “Colgate NEEDS a place like this!”

It was a nice arena but it was not always a fun time–oh the stress and anxiety of those car rides to and from Annapolis! During the games, Mark, the AD, and his friend Big Red would pace around the concourse (they were different days indeed). I remember the two most important games of that period though–the 1994 Patriot League Championship at Navy, when Colgate lost and also the 1995 Patriot League Championship at Colgate, when my dad took me out of school to drive to Hamilton with him, and we beat Navy. It was awesome. It was Colgate’s first ever trip to the NCAA Tournament. It’s like there is something to be said for home court advantage. And I remember thinking, this place is so packed we are definitely violating fire code because I am sitting in the now non-existent aisle of the bleachers. But I was so glad that I was there to see that game.

Imagine my surprise to find Colgate in the Patriot League Championship this year. Really, God? Really.

So off we went–over the river and through the wood from Texas to Bucknell with our two kids, carrying tradition, questionable parenting, and my dad with us. 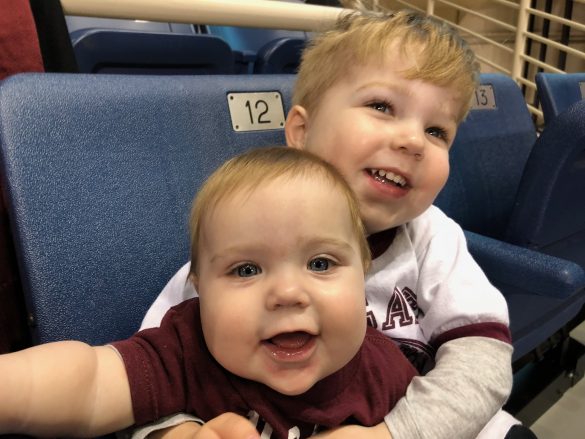 In the intervening years, Bucknell also built an arena, which my dad coveted. “It looks so good on TV” he said. Here’s what I can tell you from my first visit to Bucknell–there is real benefit in home court advantage. The game was not pretty. Towards the end of the first half, I pulled a Mark/Big Red move, and went to circle the concourse with my baby girl. Nostalgia–it makes you do crazy things.

The WHOLE REASON my parents sent me to the girls basketball camp, run by the nobody Mount Saint Mary’s women’s basketball coach, and having nothing else in common with the boys camp than the name, location and girlfriend later wife of one of Jack’s former assistants, is because Jack, the Colgate coach, worked the boys camp. I’m serious.

The boys camp is a big deal. It’s Morgan Wooten’s camp. From 1956 to 2002, Wooten coached at DeMatha, a boys Catholic high school in Maryland, which is a basketball powerhouse. In the 1960’s, his team beat Lew Alcindor and his team from Power Memorial in NYC (also Catholic, also basketball powerhouse). Jack also played on that Power Memorial team and later coached with Wooten at DeMatha before going on to coach at Catholic University, then Colgate, but throughout, Jack always worked Mason Dixon boys basketball camp.

But this is forever the difference–Jack was a product of this old school, Catholic, DC/NYC men’s basketball legendary history and sub-culture. I am so not a part of it–I’m over at the girls basketball camp. But my dad loved Jack and relished these stories.

His is also a dying breed. Jack coached a different brand of basketball from the way they play today (for better or for worse). As Hubbs (another late great Colgate) described Jack’s style, “At its best, it was a style that reflected the coach: scrappy, relentless, street tough but disciplined, cunning.”

They don’t play like that anymore. The loss at Bucknell was definitely tough to take. Home court advantage is one thing but being bad winners is another–and Jack never would have let that shit go on. A favorite of his, “they are like school on Saturday–NO CLASS.” But they don’t play like that anymore. And then he would have said some other things, too. I was far too happy to watch Bucknell lose their NCAA First Round game last weekend and for #23, the Patriot League Player of the Year, to foul out of his final collegiate game. Happy trails. Don’t let the door hit you.

The next time I remember driving to Colgate with my dad (yes, he probably took me out of school), was in 10th grade for an early-season game. Jack had been diagnosed with cancer (Playing for JB). The man that came out of the locker room was a shadow of himself. It was the last game he coached. I am so glad I was there to see that game. He died six days later. We went back to Colgate for the funeral. I remember every moment of that trip–how can you forget walking up the unpaved road to the cemetery in heels in the snow, feet wet, cold and slipping. This was also the last year I played organized basketball.

As I’ve said, Little Miss and I went home the first weekend of December to visit my family. My dad died six days later–9 days after the 35th anniversary of his brother’s death and 9 days short of the 20th anniversary of Jack’s death. The Irish don’t believe in the funeral yielding to the wedding–Jack’s widow bailed on a wedding to be at my dad’s funeral. In the same way the team wore “JB” patches the season he died, the team had “JG” patches this year (no shamrock). In June, over Reunion weekend, he will also be buried at Colgate. Hopefully there won’t be any snow.

My dad helped T and I get tickets last year, when we went to our FIRST Final Four. 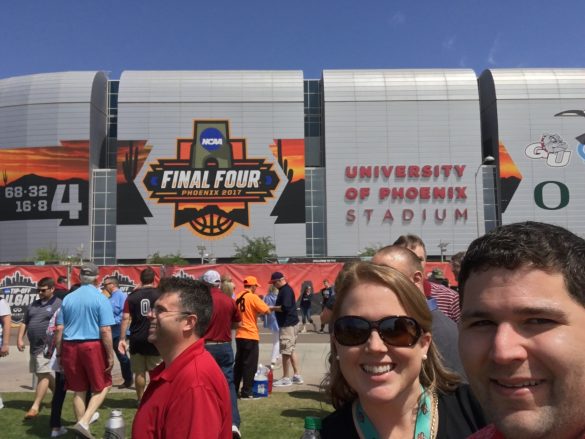 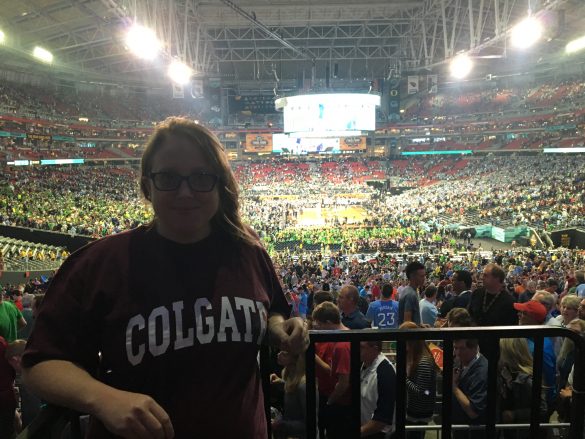 It’s bittersweet and far too convenient that it is in our backyard this year. My sister is coming. We are going. Where else would we be the first Easter after our father’s death?

In the meantime, who sits at the top of the rankings in the pool? My dad. We submitted a bracket with his sentimental favorite picks and I’m not kidding it looks like he may win from beyond the (soon forthcoming) grave. So look at that. Maybe nostalgia gets you more than basketball memories and a broken heart in March.