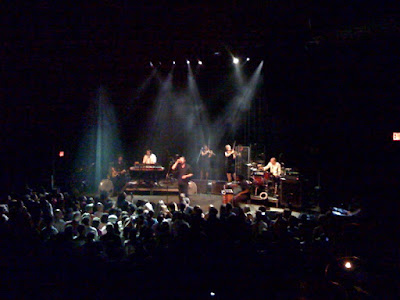 ELBOW is a band from Manchester, UK that got together legitimately 20 years ago, however, I am only hip to their groove in the past four months (largely to do with their latest album, “The Seldom Seen Kid” which was awarded the Mercury Music Prize in September 2008). Nonetheless, I was STOKED when I found out they were coming to DC this summer.

THE 930 CLUB is a great venue–intimate and intense, and the tall boys that I was standing behind were so kind and polite to let me stand in front of them (read: against the railing in the balcony, GREAT VIEW!).

BRITS IN AMERICA
ELBOW was touring here in America opening for Coldplay in every other city except for DC where they played their own show. However, the USA bit is now over and they are back to the UK to play V at the end of the month and then their hometown, Manchester, in September (“it’s luvly”, they said at the show, “you should come visit”).

GET EXPOSED
If you want to feel the ELBOW fire (it won’t be first hand like the concert) you can check out some of their songs on YouTube. The collection is a mix of music videos, live clips from Glastonbury 2008, and a mean re-mix with the BBC Orchestra (MJ, you will love, “Weather to Fly”).

Grounds for Divorce
Featured in…
-the trailer for the Coen Brothers’ film “Burn After Reading” starring Brad Pitt, George Clooney, and John Malkovich
-the trailer song for the twelfth series of “Top Gear” (consult BBC America)

One Day Like This
Featured in…
-ITV and BBC adverts for Beijing 2008
-the trailer for “The Soloist”
-the final of Big Brother 9 (UK version, which has cult following)
-aand the title of this blog posting

BE FOREWARNED
Like I said, I am a new kid (not the seldom seen kid!) to their music so my summary is incredibly short-sighted and hardly historical. The band is bad-ass and I am totally short-selling them. Fun trivia: they played Cuba in 2004. Who does that?!