Spontaneous trip home this week. First time traveling with both kids. What a production. 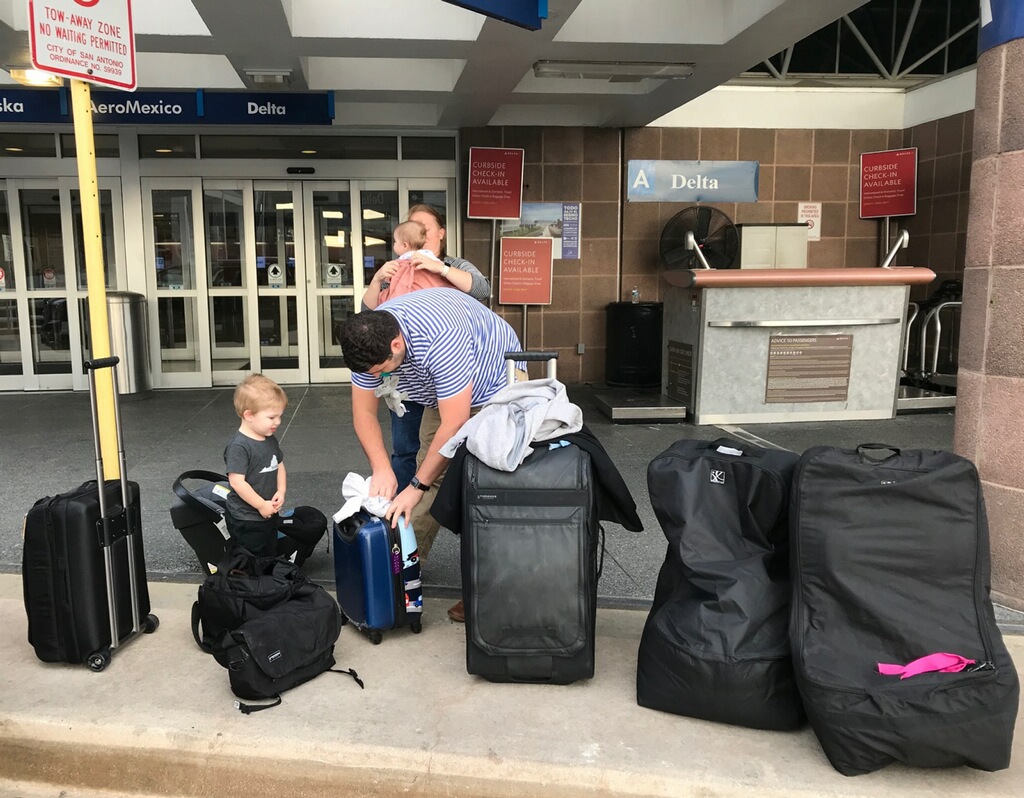 We’ve been busy since arriving late Monday night, preparing for today–the day of my father’s funeral and (what also became) our daughter’s baptism.

Little Miss and I were home just two weeks ago–my dad met her for the first time, my dad and I had some good conversations and when it came time to leave on Sunday, we had a good hug. I didn’t know it would be the last time I would see him. We went home, I had a shitty week, and then I got a phone call last Sunday that he passed away. He has been sick for a long time but we will never know how he actually died. I now know what people mean when they say, “I hope it was peacefully.”

So we spent this week: hurrying to get home, lining up the dates and times of visiting hours and funeral mass, securing a reception location, emailing/talking/visiting/texting with friends and family, riding the metro downtown to get the printed parking permit signs (but mostly for the benefit of OJ), meeting with the church, assembling and writing different pieces for the mass, spending time with family who arrived from out of town, and if I am honest, mostly ignoring my husband, our children and their needs. And feeling no confidence to explain death to a three-year-old.

Oh yeah, and it SNOWED–that’s SO Colgate (but SO NOT prepared for that). 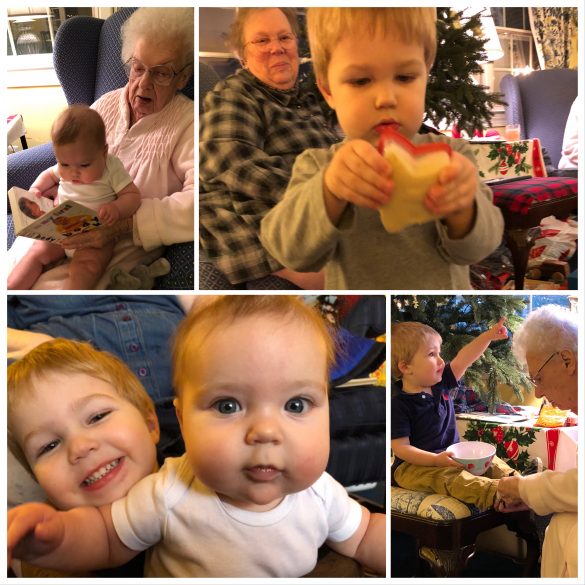 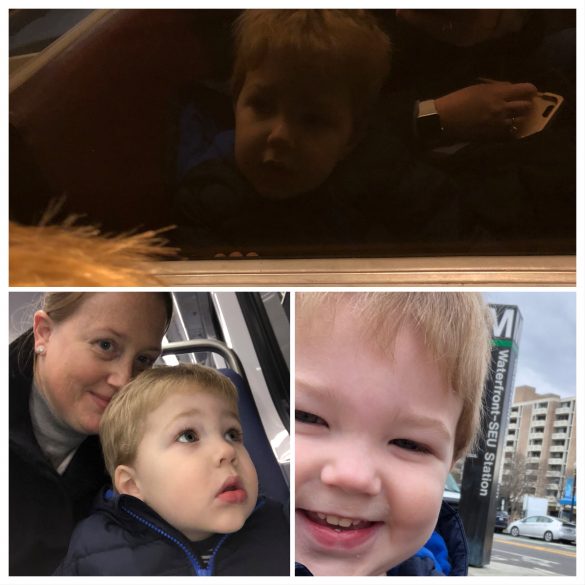 After meeting with the church on Thursday, however, I immediately began looking forward to Saturday. First, I love spending time at Holy Trinity–we may no longer live here, but HT will be my spiritual home forever. Second, the readings and song selections were kind of a no-brainer so we got to spend time during our mass planning meeting talking about my dad, our memories at HT, and choreographing the coupling of funeral and baptism.

When we baptized OJ three years ago (which was the last time we were all together at HT), it was the same January weekend as my grandmother’s birthday. This past year, OJ and I came home for my grandmother’s 90th birthday, which happened to coincide with the inauguration/women’s march where Gloria Steinem said, “no more asking daddy!” That was the last time OJ saw my dad in person.

So we had planned to baptize Little Miss on that same January weekend, next month. However since we are here, being practical, I asked the people at Holy Trinity if we could do the baptism while we are in town. They agreed and suggested we do the funeral and baptism on the same day.

During our mass planning meeting, we were trying to figure out the logistics of doing both rites–do we move from church to chapel or do we start the baptism after the funeral concludes (but wait for people to leave if they don’t want to stay for the baptism)?

None of the above.

We let the LITURGY drive the decision and do the baptism right in the middle of the funeral. 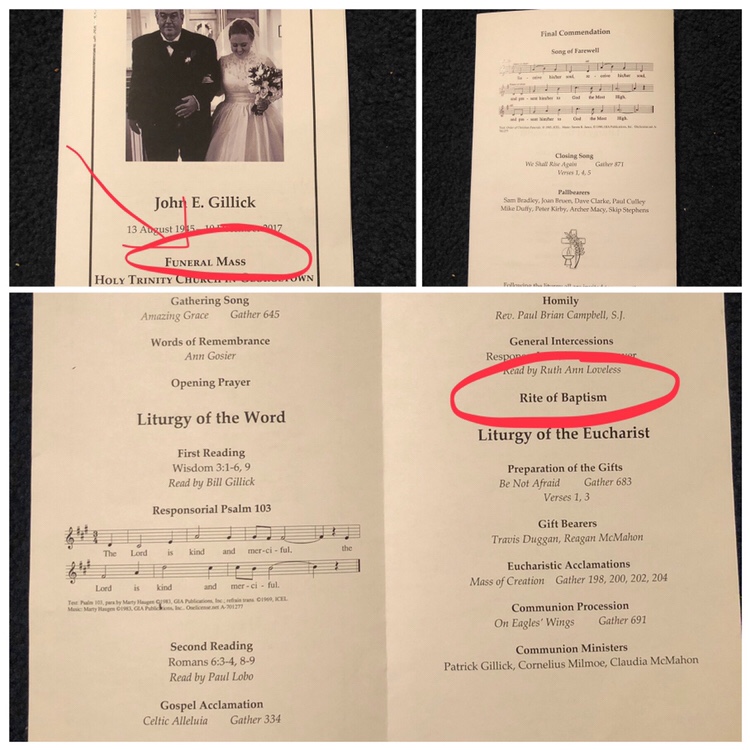 But stick with me–to Catholics, it makes sacramental sense. Baptism and funeral are the two most interconnected sacraments, according to the Irish nun in SATX who taught the baptism class I attended (my SECOND in three years because the first had “expired”). In baptism we are given the pledge of eternal life. Birth and death, circle of life.

A Reading from the Letter of Paul to the Romans 6:3-9

Are you unaware that we who were baptized into Christ Jesus were baptized into his death? We were indeed buried with him through baptism into death, so that, just as Christ was raised from the dead by the glory of the Father, we too might live in newness of life. For if we have grown into union with him through a death like his, we shall also be united with him in the resurrection. We know that our old self was crucified with him, so that our sinful body might be done away with, that we might no longer be in slavery to sin. For a dead person has been absolved from sin. If, then, we have died with Christ, we believe that we shall also live with him. We know that Christ, raised from the dead, dies no more; death no longer has power over him.

Last night we had visiting hours at the funeral home with an open casket–my dad obviously did not look himself, which is a hard thing to forget. We saw many, many people from my dad’s life, but I was most surprised to see some of the girls from my basketball team that he coached when I was in grade school. He always said that coaching our team was his greatest lesson about girls and women.

I think of myself as an extrovert and I really did enjoy talking to so many people, catching up with old friends, and organizing a transition plan for the management of my dad’s NCAA March Madness pool, but geez, by the end of it, I was OUT OF GAS. It was a really late night for everyone, but especially the babies. That’s okay–you can get up early in the morning to get four people fed and dressed and out the door by 9:00am.

Today was the funeral mass and reception–he will be buried once the ground thaws at Colgate. For so many reasons, today was beautiful. Sad, but beautiful.

I’m leaving the sad aside. On the topic of beautiful, we celebrated this sweet girl. Today my dad and my daughter were blessed with the same water, she wearing the family christening gown, which became the family gown when my dad wore it in 1945 at his baptism. 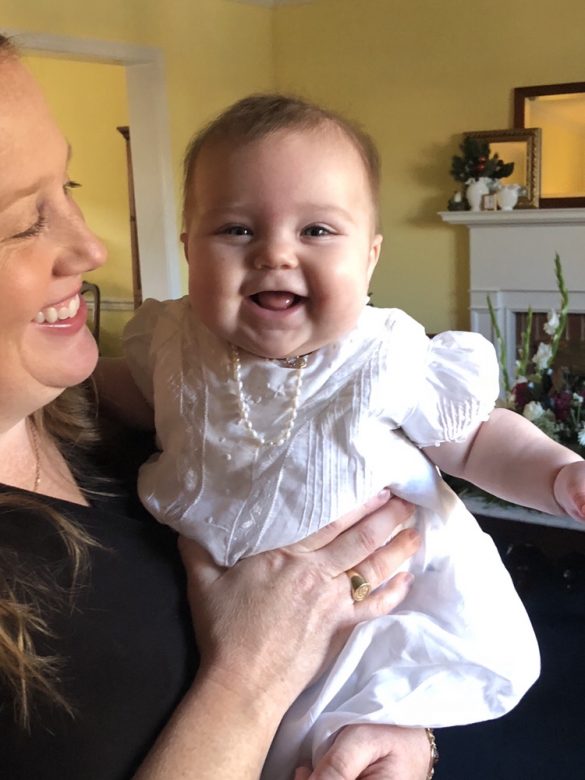 Over the past several months, my dad made goals to keep hope alive–he said he wanted to be at Little Miss’s baptism. So at her baptism, he shall be.

What you don’t see in the video is OJ trying to snot-rocket boogers onto my sister, his godmother. How charming. But I know this would actually amuse my dad and make him laugh, and then he would remind me that I largely ignored OJ all week and kept him out way too late the night before.

Before we left HT for the reception (at Chef Geoff’s no less! So appropriate as my father planned many a pre-game Colgate at American basketball receptions there) we snapped a family photo at a bench beside the chapel, documenting the evolution of our family at my spiritual home, from our wedding through two baptisms. 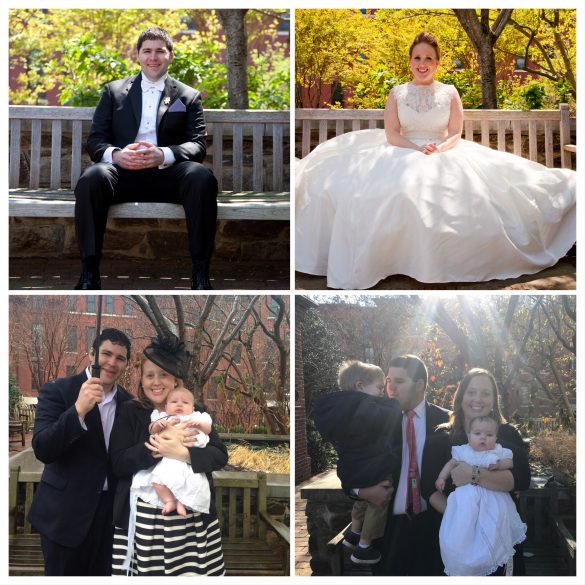 One of the blog posts writing itself in my head is about The Colgate Thirteen. I have lots to say (and SO MANY QUESTIONS) about this all-male acapella singing group. Lots.

But one of the things my dad always found annoying was that his reunion coincided with the reunion of The Colgate Thirteen. For example, Cousin C (#7) and I (#8) both remember my dad’s 25th reunion in 1992–it was also the Thirteen’s 50th reunion. Over that weekend, on Friday night in the chapel my dad received an award and Saturday night, C and I both remember sitting upstairs in the chapel for the marathon concert that is the Thirteen Reunion Tribute. Impressionable young things we were. This past summer, when my dad was celebrating his 50th Colgate Reunion (he delayed his stem cell transplant to attend), the Thirteen staged their concert, but unlike 1992, the concert was webcast. I watched it live on the computer all the way from Texas because I was pregnant and home alone for the weekend. Even though I wasn’t there in person, I have to say I enjoyed it nevertheless because some songs can evoke such strong emotional responses or memories. For example, Alex Houston singing, Hey, That’s No Way to Say Goodbye. What. VOICE.

But to today–there were several Colgate alumni in attendance, Naturally, but the most wonderful surprise is that after my dad’s casket was out of the church and the recessional song concluded, three members of The Colgate Thirteen in attendance began to sing the Alma Mater.

…When through thy valley,
Fair Chenango twilight falls,
Bringing its silence
To our college halls…

…In that happy moment,
Love for Alma Mater swells,
And the heart outpouring,
Of her glory tells…

Other voices joined. And there was only singing.

Colgate, Alma Mater,
Fairest theme of all our lays!
Colgate! Alma Mater,
Ever blest, thy days.

I found out later that my mom had the idea to ask these guys before mass if they would do it. She put them up to it! But I think they were in no position to refuse her (maybe she knew that?). She said she had the idea when she was awake at 4:00am, but maybe the HT funeral guidelines gave her the idea, “Because a funeral is an act of worship, only sacred music is appropriate. This excludes the use of popular music, show tunes, and, often, patriotic music”. For our family, our name and Colgate are synonymous, owing 1,000% to my dad, so this was a special moment, singing our own brand of sacred music. Don’t worry–we can reprise in the chapel at Colgate at Reunion when he is buried (but it won’t nearly be the same). 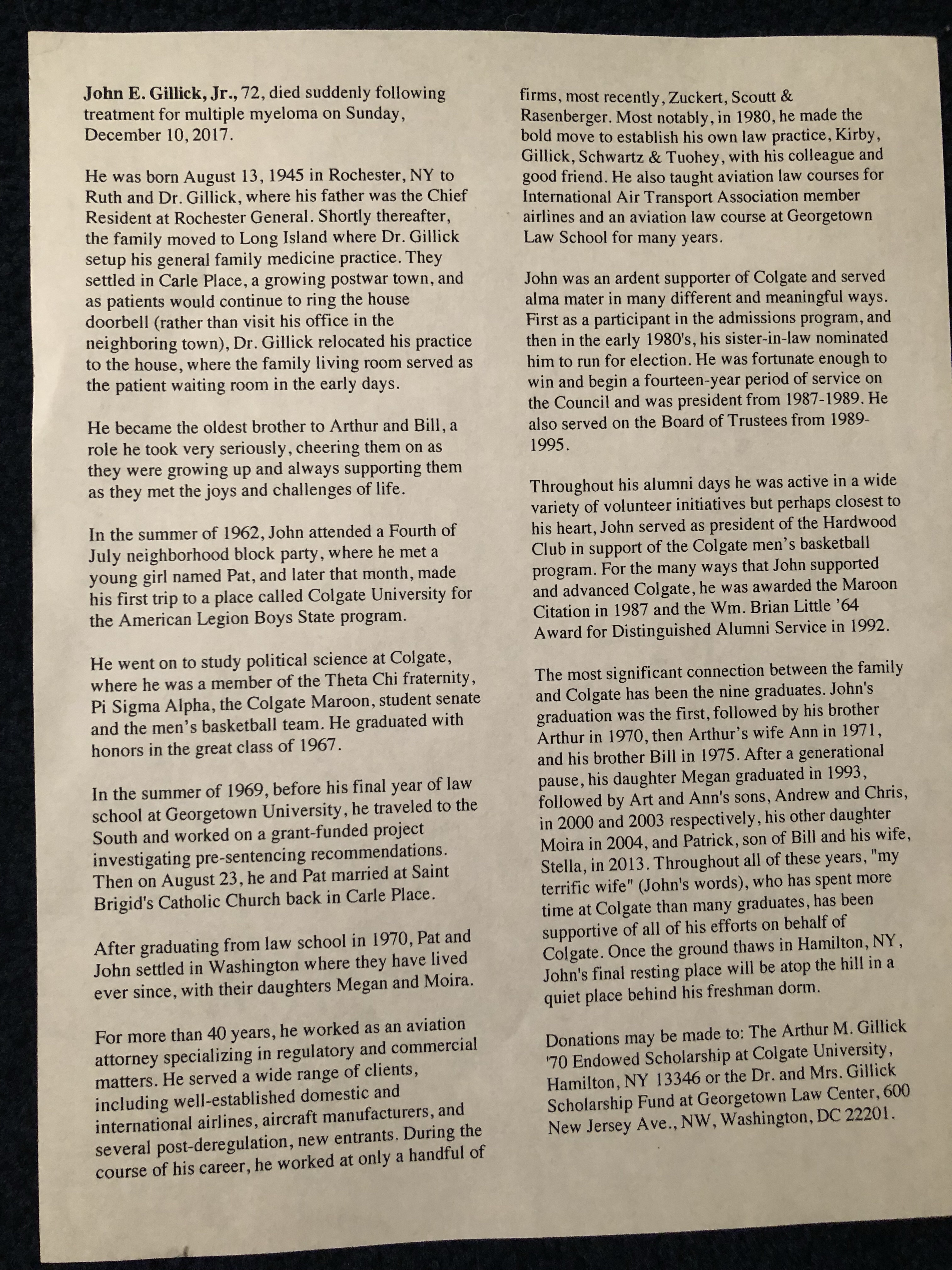 *note: following more sleep, this post was edited from the original version

The eve of, day of, and day after Jesus’s birthday party