WHAT TO SAY WHEN YOUR FRIEND ASKS FOR A READING REC…

This sounds pompous, but when I lived in London, I read (for fun, not school) a lot.

Why? Maybe because the summer days lasted so long or because it’s so pleasant to sit outside reading in a park, any park, or because shopping at Waterstone’s feels like such a treat. But it probably really had something to do with “living the life”, having not really started my career and still getting support from Mom and Dad. I do know that I am a lucky kid.

Then I moved home, time went on, and I read less. It probably had something to do with getting a “real job” and growing up. I mean, I made a goodreads account, but I never really used it. I also never caught the kindle reader craze. I think that I didn’t miss leisure reading because I wasn’t doing a lot of pleasure writing.

In balance, I don’t know that I could call myself a “book lover”. This Atlantic piece, The Decline of the American Book Lover was published about the time I got pregnant with OJ, thereby pushing any interest, energy or brainpower for lesiure reading into deep, dormant stage. However, this summer I have really enjoyed moving A FEW BOOKS from “to read” to “read” in my goodreads account, and all of them read as an EBOOK from SAPL (aka for free). It probably has something to do with still being lucky.

Here are some of the highlights from my leaning bookshelf… 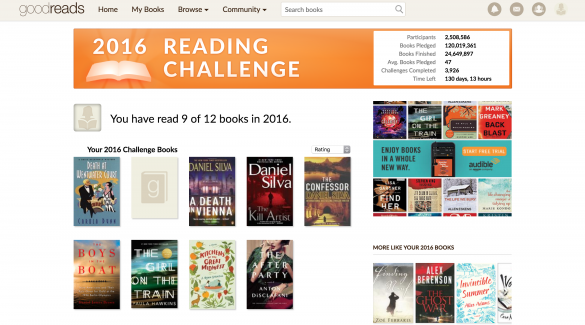 Books 1-4 of the Gabriel Allon series, by Daniel Silva

Thank God for Lauraine–finally someone else who has heard of, read, and enjoys these books.

Gabriel Allon is art restorer who is also an Israeli spy and the first few books are all related to resolving events of the Holocaust. They read quickly and easily–Lauraine calls it “escape reading”. I appreciate that while there is a formula to the stories, the description of the place is fabulous (Vienna, Rome, London, Tel Aviv, Venice, Munich, etc). Reiterating Lauraine. 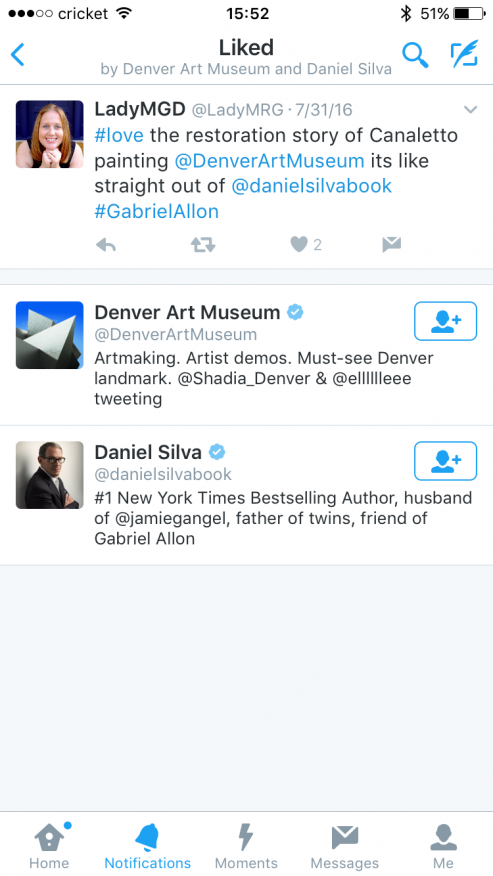 The Boys in the Boat, by Daniel James Brown

Just in time for the Olympics, you can also watch the PBS American Experience called “The Boys of 36“. My opinion: this story (in book or television) is better than anything NBC is shoving down your throat.

Both my high school and college have rowing teams but going to Henley is a “once in a lifetime and it doesn’t matter if I never rowed experiences” (thank you, Junior League of London).

The Boys in the Boat is not about the privileged guys. The true story is about eight guys from the University of Washington, who came from nothing but wanted a spot on the crew so they could be guaranteed a part-time job at the school ensuring they could eat, learning to row, and later beating all the privileged and elite East Coast schools  to compete in the Berlin Olympics (“in financial terms, it was pretty starkly going to be a clash of old money versus no money at all”), and then beating all of the professional amateurs they rowed against, including England, rowing The Husky Clipper, which had been “christened” with sauerkrat “to get it used to Germany”.

But before there was gold in Berlin, there was this in Poughkeepsie:

“As Washington pulled even, Moch leaned over toward the Syracuse boat, smiled, and said, rather softly but in his deep baritone voice, ‘Go to hell, Syracuse.”

The Girl on the Train, by Paula Hawkins

Set in (but more outside) London. Need I say more. It’s the British equivalent of a “beach read” which is a “train/tube/bus read”.

“Finding yourself is bullshit” -SciBabe